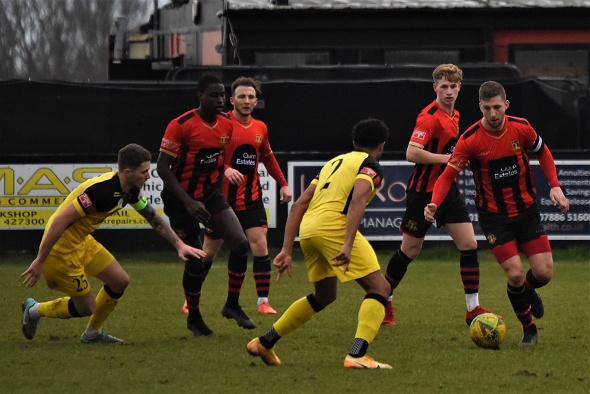 The Brickies season ended in disappointing style on Saturday (23rd April) afternoon as Corinthian netted the final two goals in what has been a reasonably successful Sittingbourne season.

After flirting with the Play Off places for much of the season, its only in recent weeks that form seems to have deserted the Brickies and sadly this was just another game too far.

With the wafer-thin squad already stretched, Darren Blackburn’s plans were dealt a further “blow” as skipper Kane Rowland was unavailable due to the birth of his first child – congrats to the new parents – but it meant that the Brickies boss named two youngsters on the bench as Paul Darran joined Will Oliver.

The opening exchanges had all the feeling of an end of season contest which only had anything of real note in the closing stages. The home side almost scored what would have been the most bizarre goal of the season on 39 minutes. A free kick was played into the box and top scorer Johan Caney-Bryan appeared to be impeded going for the ball. Referee Peter Wilson waved away the appeals and as Corinthian keeper Aiden Prall tried to launch a ball forward, Toby Bancroft blocked the clearance and the ball seemed destined for the net until it took a bad bounce for the home side and bounced high and ff the top of the bar. A goal kick was awarded and so assumingly a goal would have been as well.

Within minutes the visitors were in front as a ball into the home box was dealt with and Josh Stirman was on hand to drill the ball past Harry Brooks to give Corinthian the half time advantage when in truth neither side really deserved one.

For the visitors, it’s been a season of discovery at a new level whilst the Brickies have exceeded many predictions of a season of struggle even if the end of the season has seen a downward spiral in form – the second period showed both extremes as in the late April sunshine, there wasn’t much free flowing actions. The Brickies roared on by the passionate support around the Jarmans Stadium just couldn’t find a way through a stubborn Corinthian defence – not even moving the giant Lex Allan forward for the closing stages helped.

The games – and the seasons – final goal came in the closing five minutes and was tough on keeper Brooks as a drive from distance was magnificently turned aside. From the corner though, the defence didn’t get the ball away and Lekan Majoyegbe accepted the gift.

A frustrating end for Blackburn and his charges after what has been a hugely enjoyable and for most of it successful season – the managers first full one in charge – a season that could yet prove the springboard going forward!